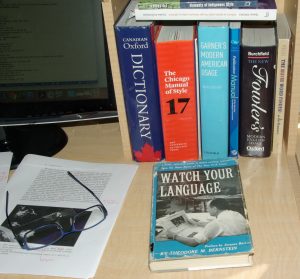 One of our neighbours has been downsizing recently, and discards from her bookshelves have shown up on the curb by her house. One volume I snapped up was Watch Your Language by Theodore M. Bernstein, described on the cover as “a lively, informal guide to better writing, emanating from the News Room of The New York Times.”

Bernstein was assistant managing editor at the Times from 1951 to 1969, determining which stories were chosen for the front page and how they were displayed, as well as improving the paper’s writing and editing. He wrote or co-wrote seven books on grammar and usage (Miss Thistlebottom’s Hobgoblins may be the best known). Watch Your Language, published in 1958, was written for the world of newspapers, with chapters on writing and editing news stories and headlines. But there is much that is relevant for the editor working on books, reports, theses, and government documents.

In the introduction, Bernstein sets out the perennial editorial battle lines, with “stiff-necked grammarians, brandishing rigid rules,” on one side and “the radicals, who take the position that if the people say it, it is correct,” on the other. He “refuses to join either camp” but “takes up his position a trifle to the right of center,” stating, “If writing must be a precise form of communication, it should be treated like a precision instrument: It should be sharpened and it should not be used carelessly.”

Watch Your Language contains chapters on word usage and grammar that remain useful today, six decades after the book appeared. Writers, and people generally, still misuse “literally,” “lie–lay–laid,” or “flout” and “flaunt”; are afraid of using “like”; and misplace their modifiers (“As reconstructed by the police, Pfeffer at first denied any knowledge of the Byrd murder”). Bernstein gives short but memorable lessons on noun-verb agreement (“the grammatical error that crops up most often in news writing is disagreement in number between subject and verb”) and the sequence of tenses when writing about “successive layers or planes of past time.”

In some cases, Bernstein was fighting losing battles. Of “balding” he writes, “There is no such word as ‘balding.’ Why not ‘baldish’?” Which led to the following comment in Webster’s Third New International Dictionary, Unabridged: “[Balding] evidently originated in Time magazine, where it was first seen in 1938 . . . It later fell afoul of the usage editor of The New York Times, who denounced it repeatedly in articles and books . . . It has become a perfectly ordinary, familiar, and well-established word that may now be found in the pages of such esteemed publications as The Times Literary Supplement, The Economist, The New Yorker, and, yes, even The New York Times.”

And when Bernstein notes that the Associated Press has prescribed “rock ’n’ roll” as the style for a new form of music, he adds, “It seems appropriate, if repulsive, so we’ll string along, hoping the while that the whole business will roll down the drain before too long.” That didn’t happen.

Some of Bernstein’s pronouncements are cringeworthy in 2020. Under “gender” he writes, “Gender pertains to grammatical distinctions, sex to physiological ones.” Elsewhere he says, “In the first place, ‘forewoman’ would be preferable to ‘forelady.’ But in the second place, ‘foreman’ would be preferable to either. Our tendency is to avoid feminine forms.” How times have changed.

The question of gender was the subject of a recent post on the website of ACES, the Society for Editing, that shows how editors continue to work to make writing more precise. Henry Behrens (who uses the pronoun “they”), a corporate editor at a health-care management consulting firm, writes about introducing inclusive language at a workplace that “was stylistically still in the 1980s.” Behrens presented research on how other firms in the sector “were talking about race, ethnicity, gender, ability, age, and more,” and successfully lobbied for “language that doesn’t exclude anyone, either purposefully or unintentionally.” They write, “Now, my company is taking more active strides toward supporting a diverse and inclusive workplace . . . Having worked to lay the foundation of an inclusive language policy in our editorial style guide, I am gratified to see support for similar initiatives championed from the top.”

As Bernstein wrote in 1958, “To be sure, the English language is a changing and growing thing . . . There is need, not for those who would halt its progress altogether, but for those who can keep a gentle foot on the brake and a guiding hand on the steering wheel.” Perhaps, but it also needs editors like Henry Behrens, bringing change to corporate writing, and the late Gregory Younging, whose Elements of Indigenous Style has influenced APA citation style and editors throughout Canada and the world.

Still, I’m glad I picked up Watch Your Language, and though it won’t push the Chicago Manual of Style, Elements of Indigenous Style, The Bias-Free Word Finder, and other current style guides off my desk, I’ll enjoy dipping into it for advice on some of the perennial editing questions (e.g., “that/which,” “who/whom”) and hilarious examples of New York Times editors asleep at the desk:

Getting published: A smorgasbord of choices
Here are some of the pros and cons of publishing your manuscript with a traditional publisher or self-publishing.
What is editing?
Editing, like many words, can take a lot of modifiers.