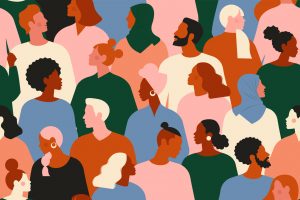 One of our responsibilities as editors is to be on the lookout for discriminatory language, hidden bias, and stereotypes in the text we’re editing. We want to use words and phrases that promote inclusivity, respect, and justice. But this process is complex and often intimidating; the language for race, gender, disability, and every other aspect of identity is constantly evolving. While we may recognize the importance of using language that respects the lived experiences of under-represented groups, we don’t always know what language is harmful.

I recently attended a webinar, “Choices Matter: Language in the 21st Century,” offered by Editors Canada, that tackled these issues head on. The presenter, Rhonda Kronyk, is a settler/Dene researcher, writer, and editor, and many of her points resonated with me.

Rhonda pointed out that there are a lot of words and phrases we know not to use. These are easy edits to make. But we also know language can be subtle, and racism and bigotry can be difficult to detect. She gave several examples of common words and phrases we may not think of as discriminatory:

Another thing to keep in mind is that our language is deeply rooted in a binary model of gender, and non-binary gender is almost invisible in the materials we edit. The language of gender is changing, and Rhonda shared some problematic and preferred terms from the GLAAD Media Reference Guide, which was created by writers and journalists from the LGBTQ community in the US. For example, they recommend we use the term “transition,” not “sex change”; “assigned or designated [male/female],” not “biological sex”; and “not visibly transgender,” as opposed to “passing.”

Rhonda sought to be non-prescriptive, but she was very clear about one thing: members of the dominant social group do not get to decide what others find offensive.

So how do we keep on top of all these issues?

We should educate ourselves by reading existing resources from under-represented groups. Inclusive language is not new and there is a lot of information already out there, both online and in print.

Rhonda advised against asking the first person we find from an under-represented group to be our only resource. Rather, we should first read blogs, articles, and books by members of the community we want to learn more about. Further, if we then do more listening than talking, we’ll learn a lot—not just about what terms people in that community are using, but also how they are affected by language. We need to listen to people who have had the experiences.

We can also check for style guides published by members of a specific community. There are a lot of excellent resources out there:

There is no preeminent authority on inclusive language. We need to continue to do what comes naturally to editors: consult as many style guides as possible and accept that language around diversity and inclusion, like the language itself, is constantly evolving.

Rhonda left us with some provocative questions: