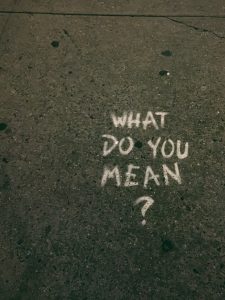 At the beginning of plain language workshops for workplace writers, I like to show a photo of an outdoor water feature located near a busy retail corner in Vancouver. In particular, I want people to see the sign on the surrounding concrete wall.

Yikes. No one should have to work so hard to understand a nine-word sentence.

Unfortunately, this is an example of an all-too-common style of workplace writing, where someone starts with a simple message like “Please stay out of the water” and ends up with something they would never say in any face-to-face conversation.

We confront unnecessarily complicated writing every day. Sure, it’s in the usual suspects like government regulations and insurance policies. But it’s also in our email inboxes (and in our own sent mail). It’s in the messages we receive from our children’s school, from the sports club we belong to, and from the council that manages our condo building. Every time someone writes something for work or in some other professional capacity, the chances of it being gobbledygook are far too high.

In his brilliant (and hilarious) Thing Explainer: Complicated Stuff in Simple Words, author, cartoonist, and engineer Randall Munroe gets at the root of the problem. “I’ve spent a lot of my life worried that people will think I don’t know enough,” he confesses. “Sometimes that worry has made me use big words when I don’t need to.”

In our attempts to impress with our vocabulary and complicated sentences, we can completely fail to communicate.

In Thing Explainer, Munroe challenged himself to use only the thousand (or “ten hundred”) most common words to explain complex things like nuclear reactors and submarines (visit his simplewriter if you’re game to try this yourself). “It made me let go of my fear of sounding stupid,” he says. “Using simple words let me stop worrying so much.”

You don’t have to be as extreme as Munroe to practise using simple, common words every time you write. While you’re at it, you could practise some other plain language techniques too. Readers might actually stay out of the water if that’s what you ask them to do.

An energizing week with young readers
Since 1977, the Canadian Children’s Book Centre has organized and hosted an annual book tour for children’s authors, illustrators, and storytellers.
Happy 40th, CJSAE!

Congratulations to the Canadian Journal for the Study of Adult…